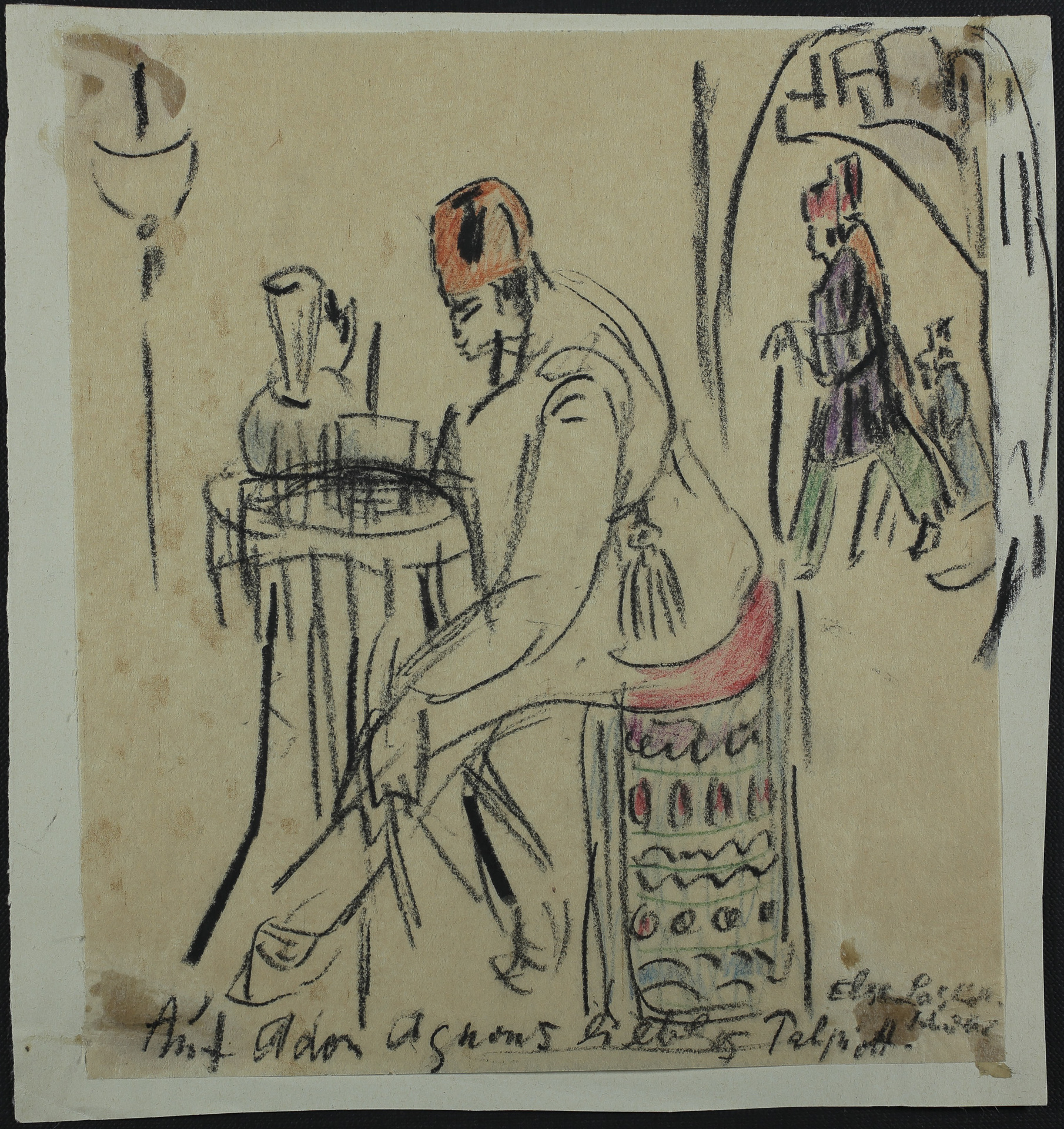 When Else Lasker-Schüler travelled from her Swiss exile to Palestine for the first time in 1934, the country was not an area free of conflict. At the same time, during this period much was still open and possible. Lasker-Schüler’s book Das Hebräerland (»The Land of the Hebrews«), written in 1937 after her second trip to Palestine, is a poetic text. It does not depict historical reality, but rather sketches and traverses potential spaces, even where real places and people are recognizable. What can be read as sympathy for the Zionist project and its justifications also appears as highly idiosyncratic and cannot be assigned to a simple narrative of belonging.

Thus, the focus is not on the construction of a solid House (in) Zion, but on the process of building itself, an interminable process that resembles a collage in which the individual parts of the structure remain visible. Here, the artistic is combined with an ethical claim: »Love thy neighbor as thyself«. Originally from the Torah (Lev 19:18), this commandment is integrated into the text as a quotation, in a context that highlights commonalities between Jews and Christians.

Much space is also devoted to the Arabs, who are portrayed as sophisticated architects stemming from a long tradition of master builders. The mixing of different influences in the new architectural style of Das Hebräerland becomes an image of togetherness, a togetherness that does not erase differences but instead releases creative energies. Bukharan Jews from Samarkand or Nubian Arabs stand for the colorful spectrum of peoples and cultural traditions, »Oriental Jewish and Arab students« look so similar that »the traits of these twin tribes can hardly be distinguished any longer.«

In her sketches from this period, Lasker-Schüler continues drawing orientalizing self-portraits: one example is a napkin signed »from Jussuf« that depicts a figure sitting at a café table and wearing a fez. This could represent the drawing poet herself, who in this instance is writing a homage to the Jerusalem district Talpiot, founded by Zionists and home of the Hebrew writer Samuel Yosef Agnon, to whom the first-person narrator in Das Hebräerland pays a visit. The playful combination of different features and graphic elements becomes an artistic project that resists clear attributions and appropriations, especially against the background of real historical conflicts.

»One does not move between individual people on the slopes and streets of Zion, but between peoples! The tribes of Judah, every single tribe of colorful blocks, are nestled methodically in the town quarters of their picture building kit. The most diverse oriental and occidental peoples and religions move among these enormous tribal building blocks (›Stammbausteine‹). And yet Jews and Christians, Mohammedans and Buddhists walk hand in hand here. This means that everyone meets his neighbor responsibly. It does not befit one to sow discord here in the Holy Land.«
(Das Hebräerland, p. 14)


Associated objects:
»Talpioth in Jerusalem between the Mountains of Moab (Arab Students)«
The Land of the Hebrews