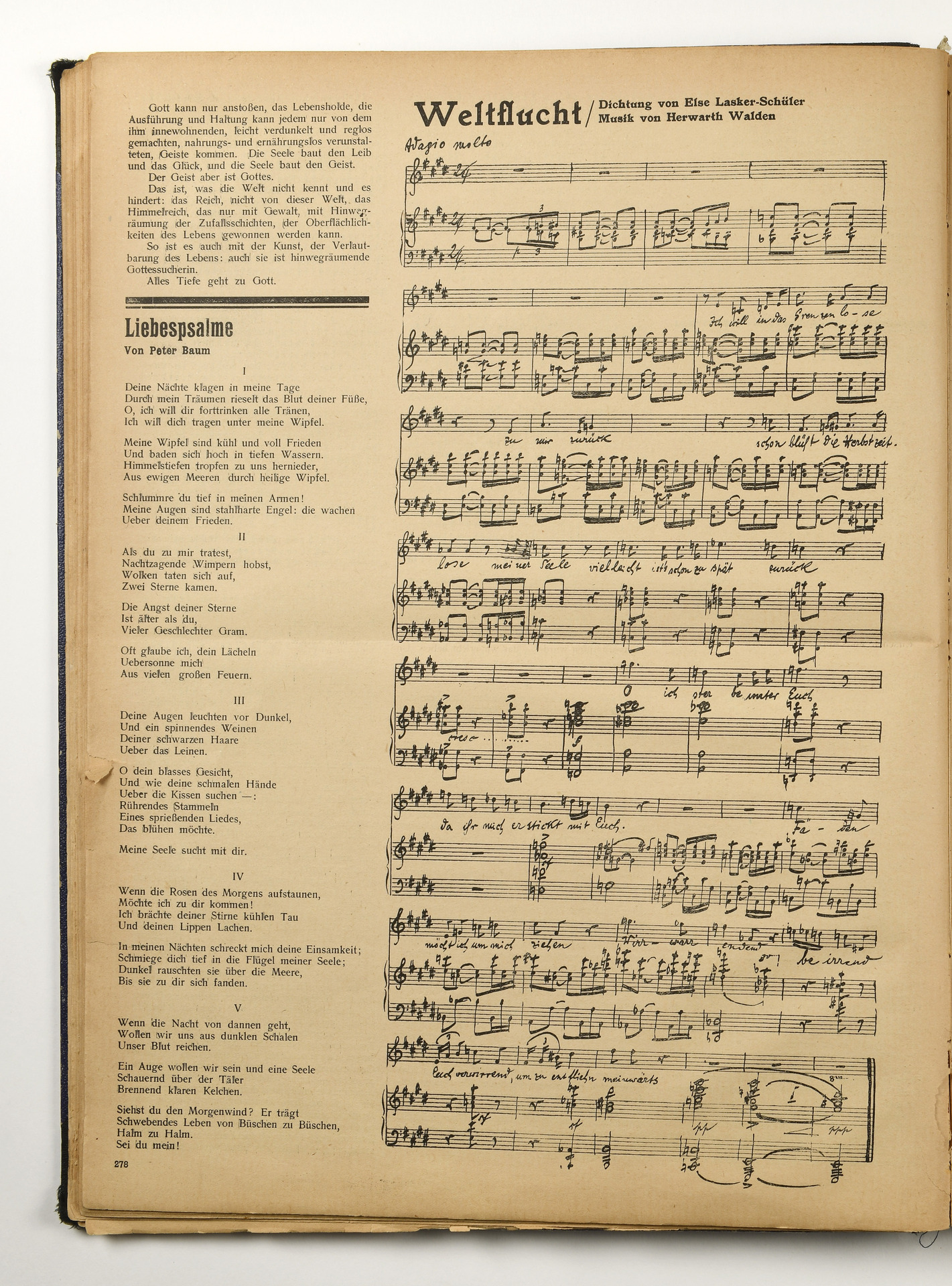 »Weltflucht« (also translated as »Retreat from the World«) is one of the very first poems by Else Lasker-Schüler to be set to music. As early as 1904, Lasker-Schüler’s second husband Herwarth Walden created compositions of three of her poems for his wife, which were subsequently published as »Zehn Gesänge op. 1« (»Ten Songs op. 1«) by the Reinecke Verlag in Berlin. In 1910, Walden published a facsimile of his fourth musical setting (song) »Weltflucht« through his own publishing house »Der Sturm«. A further six settings were planned but never realised, due to Lasker-Schüler and Walden’s divorce in 1912. Renowned as a publisher, writer, gallerist, and mentor, particularly in the context of German Expressionism, Walden is less well-known as a composer. His oeuvre is small and he ceases composing after only a few years.

Lasker-Schüler’s second marriage was characterised by artistic collaboration. »Der Sturm« was the writer’s primary publication medium, especially for her poems. And, just as the couple debated and influenced the literary and artistic scene in Berlin and beyond, so it likely was in their world of music. While Lasker-Schüler can hardly be considered to be musically educated, she possessed a fine ear for music, which is reflected in the exceptional musicality of her poetry. She nonetheless overestimated the quality and significance of her husband’s compositions.

»Weltflucht« was first published in Lasker-Schüler’s collection of poetry Styx in 1902. In 1919, she dedicated the poem to »the song’s composer, Herwarth Walden« (»dem Tondichter des Liedes«). With 30 musical settings, »Weltflucht« is one of Lasker-Schüler’s poems most frequently set to music to this day. Walden’s version is an adagio molto. The piece’s chromaticism, a common characteristic of Expressionist music, is very pronounced. From the very beginning, the voices in the piano part »flee« from one another.

Even though the composition is in E major, it immediately transitions to H major (B major in English) and later to C major. The harmonic relationships are intricate, as are the occurrences in the poem. The second part of the song also features a convoluted harmony with a chromatic bass line: »To end confusion« (»Wirrwarr ende[n]«), as well as circular movements that might represent »[spinning] threads« (»Fäden [spinnen]«) and, with D-flat major, miss the home key E major quite spectacularly.

Finally: The composition takes a long time to find its home key E major, as the mirroring of the opening motif comprises the interval E1-H, the piece ends on »Me-wards« (»Meinwärts«) in H minor, and only then – for the first time! – reaches the home key E major in its last two bars. The two keys »E« and »H« may amuse us, as these are the two spouses’ initials, Herwarth and Else.

Find a transcription of the piece here.

For more on Lasker-Schüler’s musical poetry and the more than 1,900 musical scores to date by over 400 composers, see the following recent publication:

Musical Score to »Escape from the World«