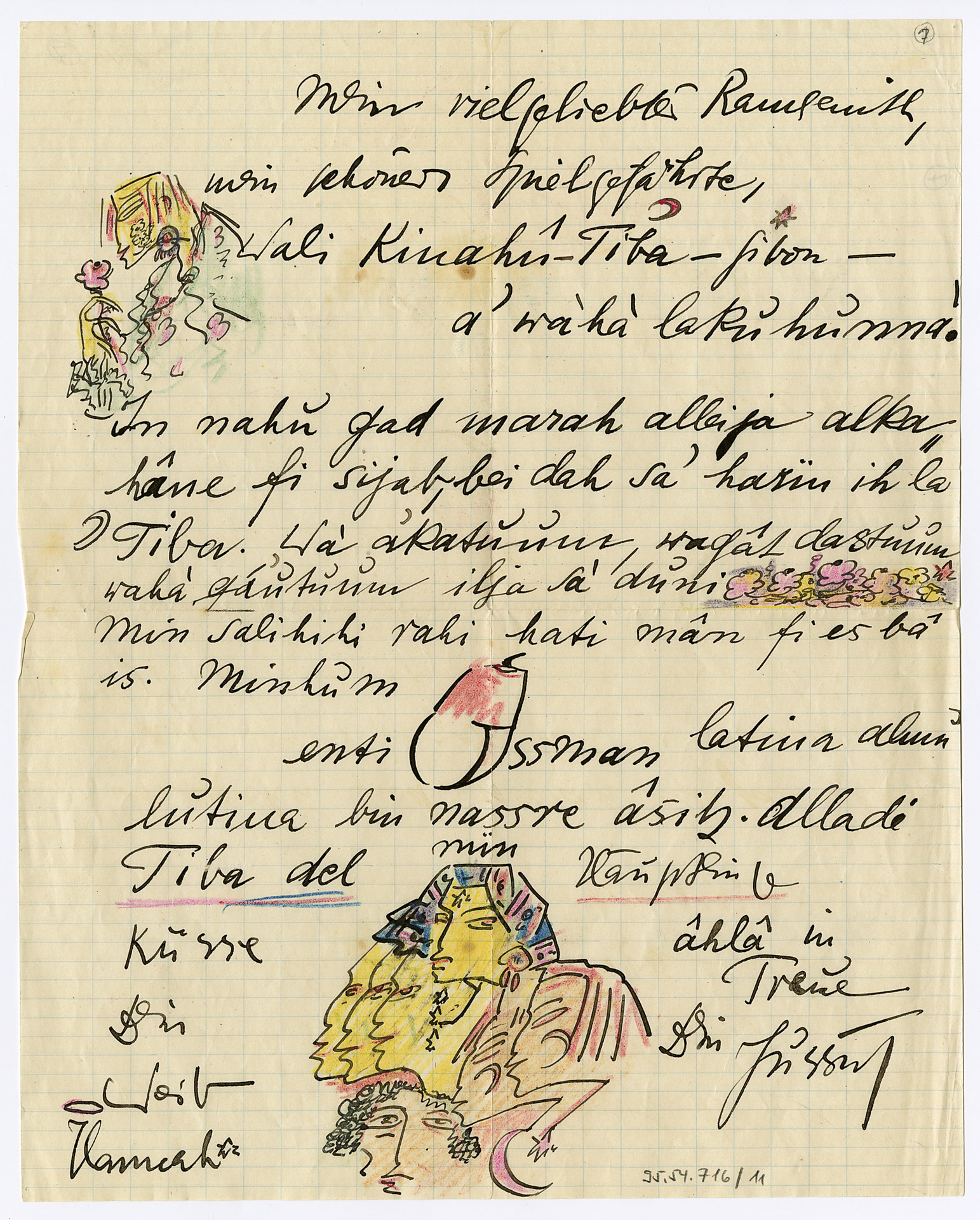 Letter from Else Lasker-Schüler to Karl Wolfskehl, October 1916

In the spring of 1911, Else Lasker-Schüler and Karl Wolfskehl (1869-1948) met in Munich; in the autumn of 1916, their contact ceased. The letter shown here is one of the last testimonies of this brief exchange, which was so intense that, even in 1946, one year after the poet’s death in Jerusalem, Wolfskehl still remembered the »wonderfully idiosyncratic, fantastically sparkling letters from the ›Prince of Thebes‹« written to him »whom she called ›Ramsenith.‹« But the correspondence was perhaps lost »behind the iron curtain of yesterday« (K.W. to Adolf Wagner, 21.2.1946, DLA).

Jussuf’s letters, kept secure by Wolfskehl’s family during the Holocaust and finally making their way to the German Literature Archive Marbach, reveal a world rich in imagery in which Lasker-Schüler turned the poet from the George-Kreis into a »playfellow«, and in which Judaism was Egyptian, Arab, Oriental – in any case special. This was hardly conceived as Cultural Zionism, as the kingdoms of Gibon and Thebes belonged to the poets; the letter is a fantasy-Arabic written in the Latin alphabet. Such ideas, like the illustrated flowers and moons in the text, are reminiscent of the Romantics, yet they also make tangible a Jewish experience that persisted, despite the legal emancipation of Jews in Germany, into which Lasker-Schüler and Wolfskehl were born in 1869. The world of images conceived here affirms, against the reality of the German Empire, affinities of both traditional and independently devised scripts. Questions surrounding the border between reality and poetry did not apply here. Both poets were »noble Egyptians«, as Lasker-Schüler explains in her Malik.

Wolfskehl played along until poetic differences revealed themselves through the deterioration of personal ties. The »Archangel« Stefan George, Wolfskehl’s friend, had proven himself to be an »old-fashioned schoolmaster« in Lasker-Schüler’s eyes (E.L.-Sch. to K.W, January 1912), someone who showed no understanding for her poetry. She nevertheless invited Wolfskehl once more to a reading in Munich in mid-October 1916. The letter is to be read in this context: Jussuf – amid a circle of his companions, who are shown in profile – turns toward the King of Gibon and demands intuitive understanding from him; he seeks to attract through bright colors, expects a reunion, engenders commitment: »âhlâ faithfully – Your Jussuf« (E.L.-Sch. to K.W, Oct. 1916). The following letter then issued a commandment of silence: »Out of reverence for the hour«, since the »playfellowship« was buried despite abiding affection (E.L.-Sch. to K.W., 22.10.1916). Yet Lasker-Schüler wrote Wolfskehl into her own poetic world one more time in Der Malik (1919) – as a »beautiful, vain king«, who had terminated »his country’s friendly relations with the Malik«, a country in which Jussuf Abigail had »enjoyed staying in order to pursue artistic endeavors«. Thus the conflict was resolved through its incorporation into the poet’s own work. Within a picture of sovereign territories, Lasker-Schüler indicates the proximity and borders of two distinctive poetic projects.