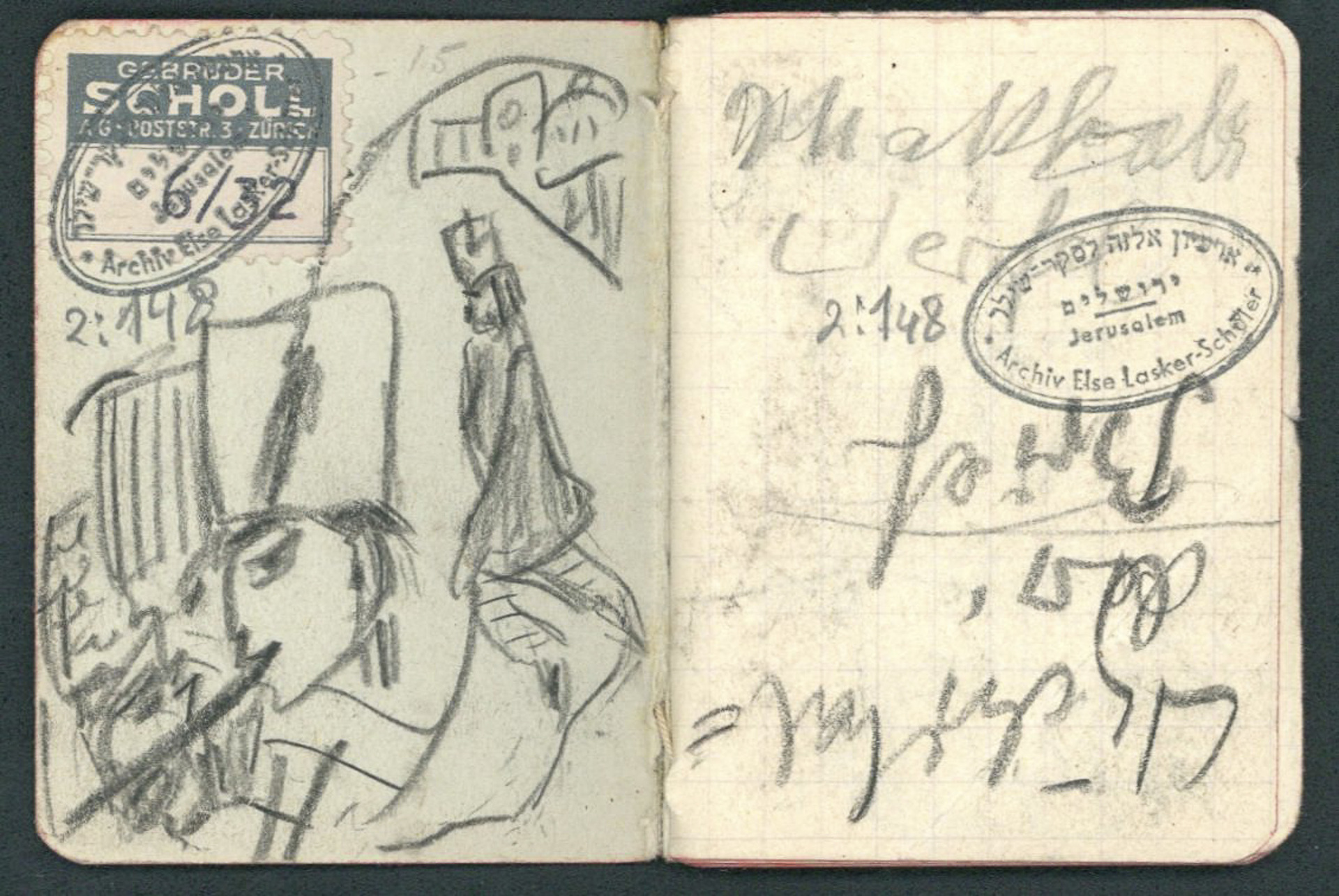 Else Lasker-Schüler’s Notebook from her Exile in Zurich, 1937

Only 4x6 cm in size, this chequered linen notebook is a testimony of Else Lasker-Schüler’s life in Swiss exile from 1933 to 1939. As a sticker shows, the notebook was purchased at the Zurich stationer’s shop »Gebrüder Scholl« in Poststraße 3. The notebook offers an insight into Lasker-Schüler’s exile network during the months of November and December 1937. It mostly contains the names, telephone numbers, and addresses of friends and acquaintances. Some, such as »Abraham Stenzel – London« and Schamai Pinsky, were themselves living in exile. Others represent Lasker-Schüler’s support network in Switzerland, especially Emil Raas (»Mill«), a lawyer from Bern and »Fürsprech« in matters of foreign residence disputes with the immigration police. The notebook also contains contact details for Jewish organizations (Keren Hayesod), the philanthropist Silvain Guggenheim (Schweizerische Flüchtlingshilfe), the art patron Hermann Reiff, and the member of the Swiss National Council David Farbstein. Additionally, Lasker-Schüler noted contacts to the Zurich radio cooperative Jakob Job and to Emil Oprecht, whose Zurich publishing house issued her book Das Hebräerland (»The Land of the Hebrews«) in 1937. Addresses of relatives in Berlin whom Lasker-Schüler was supporting also appear. Lasker-Schüler recorded appointments as well, for instance at meeting places for emigrants in Zurich: at the ›Café Select‹ and the ›Kino Nord Süd‹ on Limmatquai 16.

The notes were taken with a soft pencil, interrupted only occasionally by black ink. Lasker-Schüler often used pencils in exile, to save money and to spare her hand.

Her large, curved handwriting, which refuses to be constrained by the format of the little notebook, seems an apt reflection of her artistic and personal self-assertion in exile. Freedom, even under difficult circumstances and on a small scale, is a recurring theme in her letters from this period. On 20 September 1937 she wrote to Nehemia Cymbalist: »Freedom does not need to blow through windows. Your Jussuf« (»Freiheit braucht nicht durch Fenster wehen. Dein Jussuf«).

Accordingly, there is a detailed, orientalist drawing on the inside of the notebook’s cover. It was completed after Lasker-Schüler’s second stay in Palestine in 1937 and forms part of the work on her »Second Palestine« book, which remained unfinished.

In terms of literary content, the notebook also includes new »Leberreime« (improvised poetic puns), a parlor game Lasker-Schüler played in the 1920s with the author Sigismund von Radecki, whose Berlin address can also be found in the notebook. Some rhymes are critical appraisals of Bertolt Brecht and Arnold Bronnen.

Also associated with this object: