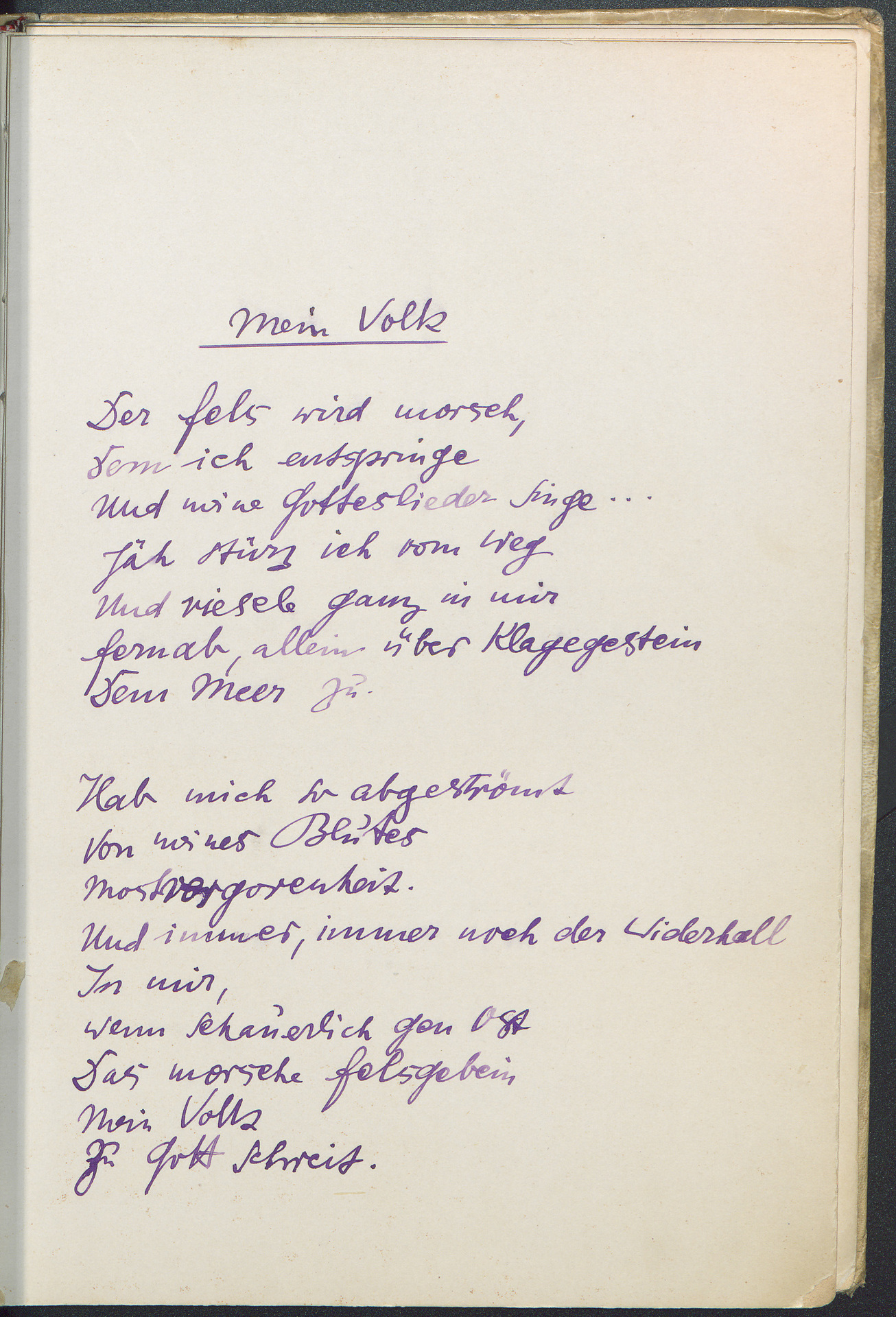 The Poem »My People«

»Mein Volk« (»My People«) is one of Else Lasker-Schüler’s most famous poems. It holds a special place in her volume of poetry Hebräische Balladen (»Hebrew Ballads«, 1913). These ballads are mostly about individual people in the Bible – Jacob and Shulamite, Joseph and Moses, Abigail and Esther – but in »My People« Lasker-Schüler writes about the people of God of whom the Bible tells and which she herself now embodies in her verses: the people of Israel.

These lines appear in Lasker-Schüler’s Der siebente Tag (»The Seventh Day«) in 1905, a time when German Jews were facing a profound identity crisis. The crisis could not be overcome, as the title already shows. Without referring to the Jewish people by name, the poet demonstrates commitment to ›her people‹ and thus undermines all the efforts of the nineteenth century to effect an acculturation, the Germanization of the Jews.

With the first line, however, the poet’s commitment already reveals ambivalence: the rock, a metaphor for steadfastness and endurance, begins to rot and crumble, and the ambiguity of this inception immediately affects the entire poem.

For how should we understand the verb »spring« (»entspringe«) in the second line? Does the speaker ›spring from‹ the rock, does she detach herself from the rock as one would jump off a cliff, does she distance herself from the rock because it has begun to rot? Or is the word a synonym for ›stem from‹, and is the speaker in fact saying the exact opposite? Does she chain herself to the rock which she, even if she wanted to, could never escape?

Initially, it seems as though the poem were describing a flight. The speaker »plunge[s] from the path« (»stürzt vom Weg«), turns its gaze inwards, »trickle[s]« (»riesel[t]«) from her innermost being towards the open »sea«; and the second stanza continues the flowing motion: the poet has »streamed away« (»abgeströmt«) from the »ferment / of [her] blood« (»[ihres] Blutes / Mostvergorenheit«) – a peculiar, almost Christian equation of wine and blood, which is of course already spoiled, like the brittle rock.

Yet the countercurrent is already inscribed in all of this. The poet’s inward path leads over »wailing-stone« (»Klagegestein«), over fragments of the crumbling rock that are reminiscent of the destroyed temple in Jerusalem, and all flight proves to be hopeless. The brittle rock is her own bones, it is her people to whom she remains genetically bound and who cry out to God from within her, so that the dry bones may rise again, as God had promised his prophet Ezekiel.

»My People« from Hebrew Ballads