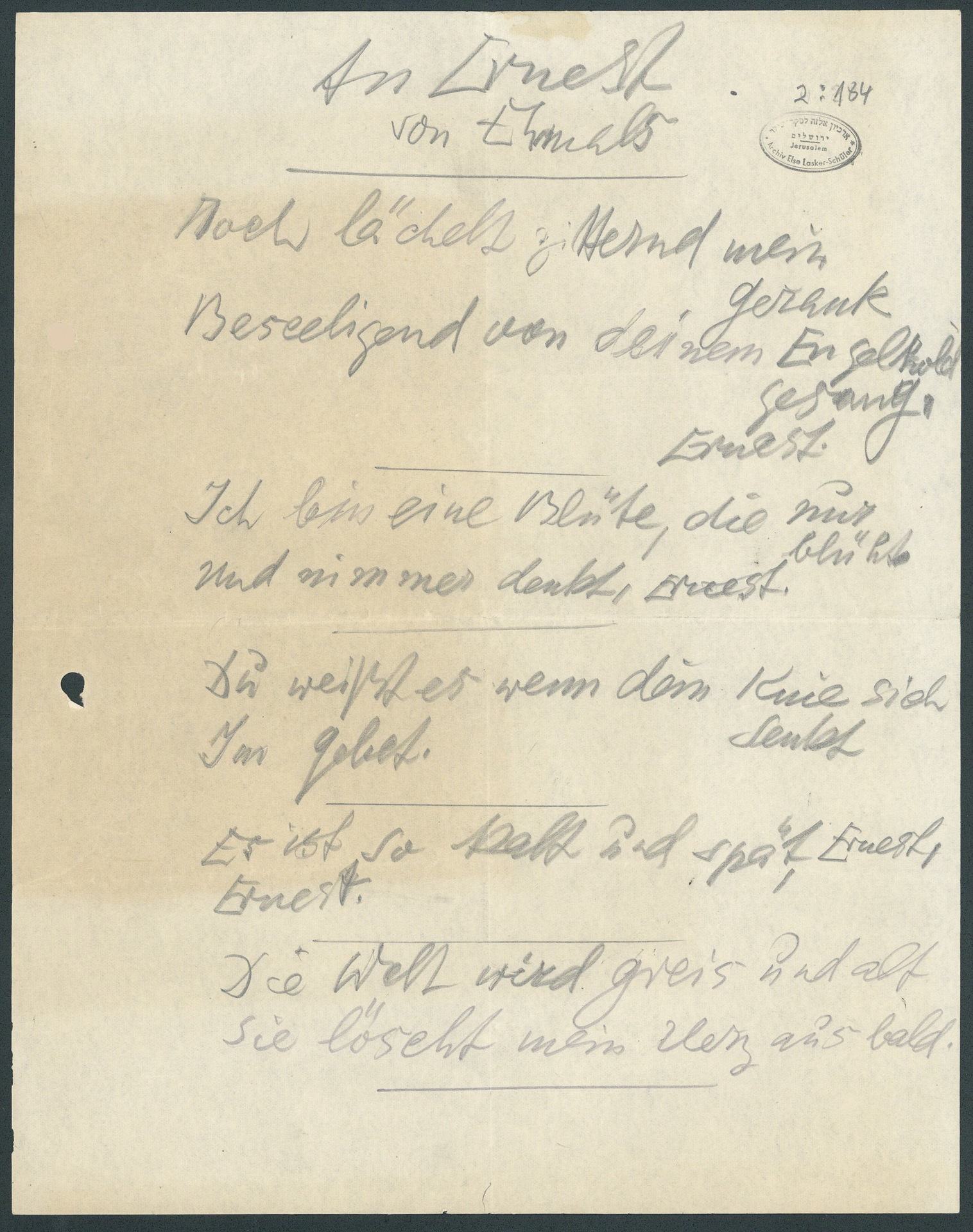 The Poem »To Ernest of Yesteryear«

In her poem »An Ernest von Ehmals« (»To Ernest of Yesteryear«), Else Lasker-Schüler addresses the educationalist and cultural philosopher Ernst Akiba Simon (1899-1988), who immigrated to Palestine in 1928. Working initially as a teacher at the Reali School in Haifa, he taught at the teacher-training college in Jerusalem and at the Hebrew University’s model secondary school from 1935 onward, before being appointed lecturer in the history of education at the Hebrew University in 1939. Ernst Simon, who had married Tatjana (Toni) Rapoport (1905-1999) in 1925, was Else Lasker-Schüler’s last great love – a love which, in the 1940s, gave strength and comfort to the seventy-year-old poet, who felt alienated and lonely in Jerusalem. On 2 May 1942, she wrote to Ernst Simon: »Tepidity poisoned me and egotism. But I myself am no longer worth anything. Only when the evening comes does my heart often fill with stars as I think of Ernest. I know well and did not mean to say that Ernest Apollo also thinks of me. If he thought of me fondly, I would not be so lost. And yet I love being only a beggar in ermine, carrying Thebes on the palm of my hand.« Ernst Simon, married and thirty years younger than the poet, always reacted cautiously, endeavored to be diplomatic, and above all took care not to upset Else Lasker-Schüler by rejecting her. In his letter to Lasker-Schüler from 1 December 1942, he writes: »Your relationship with me shall be my secret pride; it is not meant for the eyes of the world, and least of all for those of the false ›world stage‹. / Do you know why we have such a hard time with one another? Because I take you as seriously as you demand to be taken.«

Between 1941 and 1943, Else Lasker-Schüler wrote roughly two dozen poems dedicated to Ernst Simon, some of which have survived in numerous versions that differ slightly from one another. Twelve of these poems are included in Mein blaues Klavier (»My Blue Piano«), Lasker-Schüler’s last poetry collection published in Jerusalem in 1943. These poems form the second part of the collection and are preceded by the dedication »To Him«. In the typescript of Mein blaues Klavier, kept at the German Literature Archive Marbach, these twelve poems are expressly referred to as »love songs«. The addressee of the poems remains anonymous, but was most likely known to contemporary readers in Jerusalem. In the poems that remained unpublished during the poet’s lifetime, which include »An Ernest von Ehmals«, Ernst Simon is at times explicitly addressed by name. By calling his name, Lasker-Schüler directly emphasizes the private nature of these poems.

The literary estate of Else Lasker-Schüler at the National Library of Israel contains a prose text entitled »Huldigungen« (›Homages‹) in which the poet characterizes people in Jerusalem who were important to her. In reference to Ernst Simon it says: »When I encounter him, I think of the three words in the Bible: ›You are gods!‹«

Associated objects:
»In my Lap«
»To the Apostle«

»To Ernest of Yesteryear«